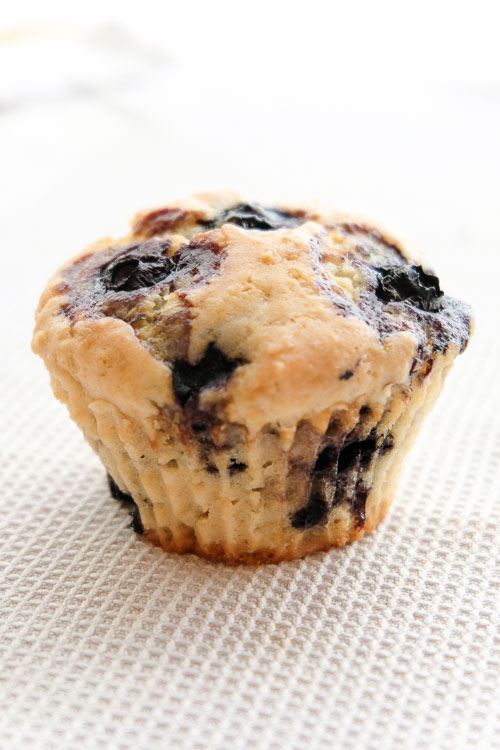 These vegan blueberry muffins use aquafaba and oat milk to make a plant-based version of the classic that is simply delicious.

Every weekend I’ve been making muffins for my family on Saturday mornings. Actually, I bake them on Friday night and leave them out on the table, under a clean linen towel, so they’re ready to go in the morning.

For this week’s vegan muffin recipe, I decided to make blueberry muffins.

Fun fact – blueberry muffins are actually the official state muffin of Minnesota. Wild blueberries are common in northern Minnesota, and if you have access to wild blueberries I would absolutely recommend you using those because they’ll have more blueberry flavor!

Also, wild blueberries tend to be smaller than store-bought ones, so you’ll end up with taller muffins if you use the wild berries.

Unfortunately, I didn’t have any wild blueberries on hand so I used frozen blueberries, which are also nice in their own way. They turn into a rich, soft, intense pocket of blueberry flavor when baked – almost like a blueberry pie filling.

Making these blueberry muffins vegan was easy – I used aquafaba instead of eggs. In case you didn’t know, aquafaba is the gel-like liquid that forms when chickpeas or other cooked bean seeds are soaked in water over time. You can use the liquid in a can of chickpeas or black beans, or make aquafaba yourself as I did for this recipe.

Instead of cow’s milk, I used oat milk. You could also use almond milk or soy milk, I think either of those would work fine.

I think you could use a flax egg instead of aquafaba, but keep in mind that it will add some fiber which could give the muffins a less fluffy texture. I prefer using aquafaba when baking something where the end result should have a lighter color, and I think it worked perfectly in these blueberry muffins.

Don’t forget to check out my vegan lemon poppy seed muffins recipe as well, they were a huge hit!

If using silicone muffin cups, place them on a glass casserole dish to prevent the bottoms from burning.
Course: Vegan Breakfast Recipes
Cuisine: American
Tried this recipe?Let us know how it was!
Affiliate Disclosure: As an Amazon Associate I earn from qualifying purchases.