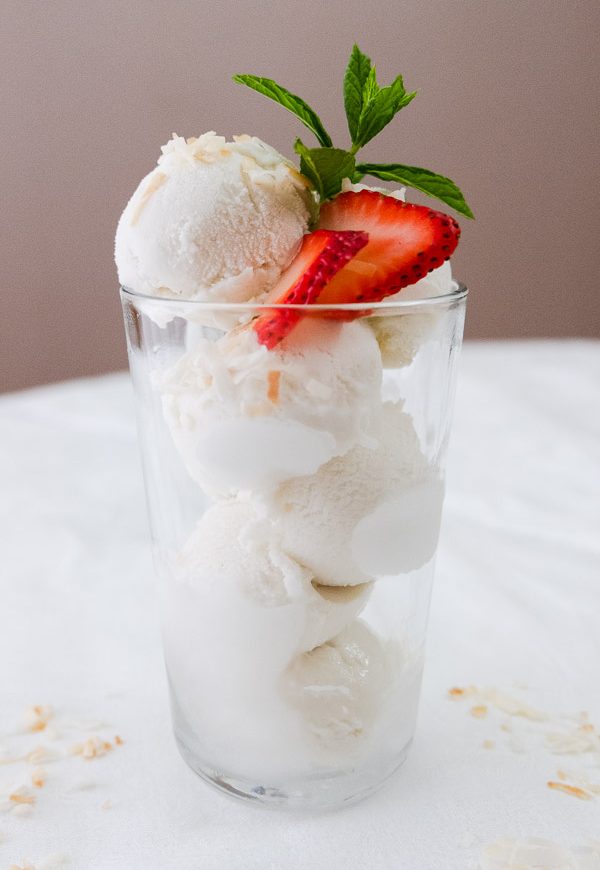 Looking for an easy vegan ice cream recipe? I think you’ll love this one. It’s a simple recipe for basic vanilla coconut milk ice cream. You can mix in fruits, matcha, nuts, etc to make unlimited flavors, as you wish.

It’s no-churn (meaning you make it without an ice cream maker), vegan, dairy-free, and isn’t made from bananas like most of the no churn vegan ice cream recipes you find.

Lactose free ice cream, for some reason, tends to cost 3 times more than normal ice cream – for just a half-pint.

I decided to create my own dairy free ice cream recipe, so that we could easily have vegan ice cream on hand – without going broke.

I noticed that a lot of non-dairy ice cream recipes are made with frozen bananas. Even though I personally like the way that those banana “nice”cream recipes taste, I wanted to make something that was closer to the taste of true ice cream – very milky and creamy and rich.

The brand I use is Simple Truth Organic™ Coconut Milk, which is available at Kroger stores in the US. It’s an inexpensive yet high-quality store brand for organic foods. This particular brand’s coconut milk has a clear separation between the coconut water and coconut cream, and it’s about 50%-50% – sometimes even 60% coconut cream per can.

Another reliable brand is Thai Kitchen. In general, organic canned coconut milk tends to have more coconut cream in it, making it better for making ice cream.

Other ingredients I used in this recipe are soy milk and vanilla sugar.

With the soy milk, I’ve found that you can use any kind of non-dairy milk and it will be fine. I like the richness of soy milk though, so I used that. You can use sweetened or unsweetened plant milk, plain or vanilla. It won’t matter for this recipe because the ice cream is going to be sweet anyway!

Now about the vanilla sugar. You may have not heard of that one before – it’s kind of like powdered sugar with vanilla beans in it.

If you have vanilla sugar (and you can find it on Amazon or in European supermarkets) use it! It has a lovely strong vanilla aroma, and a little bit goes a long way. I think you get more vanilla taste for less, cost-wise, too, than you do using vanilla beans.

The process of making ice cream without churning is fairly easy. We’ll mix together the ice cream ingredients then pour the liquid into silicone mini muffin molds like this, and freeze it.

Then, we blend the frozen pats of ice cream with plant-based milk until it has an ice-creamy texture.

You’ll need either a food processor or a blender to make this recipe. It is also possible to make no churn ice cream using a very large bowl of ice, with a smaller bowl inside it, and by mixing manually for about 15 minutes. It’s hard work, which is why I recommend using a food processor or blender.

When you’re going on a vegan diet, many of the veganized foods from the grocery store are more expensive than their non-vegan counterparts. So being able to make your own vegan foods such as ice cream, plant-based milk, and vegan butter will save you money in the long run.

This recipe yields about 3 cups of ice cream. I recommend doubling or tripling it once you’ve tried it the first time 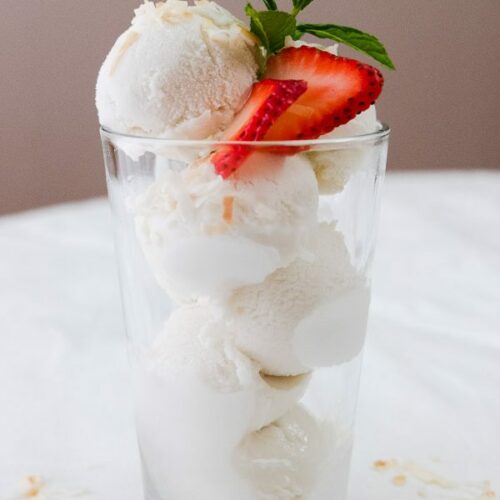 Check out my other easy vegan desserts here!

Did you try this coconut milk ice cream? What did you think?