This vegan banana bread is made without any eggs, milk, or butter. Actually, the original recipe (from my mother’s recipe tin) called for lard! No lard in this recipe either.

To make this banana bread vegan, we replace the lard with coconut oil and omit the eggs altogether.

Once you stop using animal products in your baking, you may notice that your cakes, cookies, and banana breads such as this actually smell better. I swear!

As I mentioned before, this banana bread is made with coconut oil. I just about always use refined coconut oil in my baking because it doesn’t give a coconut flavor to the final product.

It’s possible to use something like vegan butter instead of coconut oil. But after checking labels on many brands of vegan butter, I’ve noticed that the ingredients A). vary in their water content and other ingredients, and B). often are made of mostly coconut oil anyway.

So to make things simple (and less expensive), I make this banana bread with coconut oil.

This is what you need your bananas to look like in order to make a proper banana flavor in banana bread:

The bananas should be very ripe, their peels turned brown.

The best way to achieve this is to allow your bananas to ripen naturally on the counter until they are mostly brown. They should feel really soft and “past the point” of eating them.

Later, when I need them for a recipe, I’ll take them out and let them thaw on the counter. You can also defrost them in the microwave without any issues.

Once thawed, they will be very delicate. I simply puncture the peel and pull it open, and the entire banana will fall out easily into a bowl. It will be a dull brown color and somewhat transparent, this is the normal result of the starches breaking down and becoming sweeter.

Using these very over-ripe bananas will result in a slightly sweeter, more aromatic banana bread with a lovely dark color and a darker (yet still soft) crust.

You can add a crumb topping (also known as a streusel) to this banana bread before baking. The recipe is below where it says “Crumb Topping.” Make sure you press the streusel pieces into the banana bread batter or else they will break off too easily when you try to slice the bread.

In addition to the optional crumb topping, you can also make this banana bread with walnuts. Use 1/2 cup of chopped walnuts and add it into the banana bread batter before pouring it into a pan. 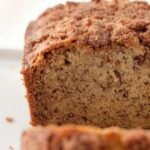 Did you make this recipe? I’d love to see how it turned out. Upload a picture of it to Instagram and tag me @InstantVeg!

Hopefully in this post you’ve learned how to make vegan banana bread and will soon be making a gorgeous brown loaf of banana-y goodness!