This Brussels sprout soup is the easiest healthy vegan soup ever. It tastes delicious, with a simple clear broth made from root veggies and herbs. Tastes like it was simmering for hours, but cooks up in just 10 minutes!

Do you ever buy ingredients at the store because they just look so good, but then once you’ve taken them home, you aren’t sure what you’re going to do with them?

That’s how I felt about my Brussels sprouts.

I happen to love the little mini cabbage heads, but it seems like most of the times when I’ve made them at home (usually oven roasted in olive oil and garlic), my family is not a fan.

So I bought these Brussels, because, you know, they just looked too good to leave in the store. They were in my fridge, untouched, for TWO WEEKS before I finally decided how I’d cook them.

I remembered one of my old roommates in college who ate the same. meal. every. day.

Her dinner was always:

Brussels sprout soup! I knew my roommate wasn’t doing rocket science when she made her soup, so I figured mine could be simple, too.

The only fancy crazy ingredient here (and the one that says FOUND THE VEGAN!) is the seitan sausage.

Seitan is made from wheat gluten, and is high in protein – it’s a great plant based source of protein for vegans and vegetarians. Once it’s cooked, it has a dense texture that’s not too dissimilar from cooked chicken or meat.

To make the sausages, you can follow my seitan sausage recipe.

You could replace the vegan sausage with whatever you want. Next time I will try dumplings!

This is an Instant Pot recipe, meaning no babysitting the stove!

I was worried that the potatoes would come out too mushy, but they were just right. 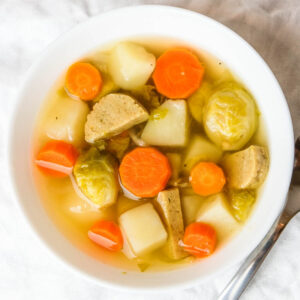