This vegan vanilla cake is pure perfection. It’s light, fluffy, and moist – with just the right amount of vanilla flavor. Top it off with my vegan buttercream frosting for a cake that’s straight from heaven.

Creating the perfect vegan cake recipe was not easy. It took many failures to come up with what I consider to be the best vegan vanilla cake, ever!

How To Make Vegan Vanilla Cake

Making this cake isn’t too hard as long as you follow the instructions. Here’s a rundown of what you’ll need to do.

If you’re wondering what aquafaba is – it’s not a brand name, it’s the name given to the liquid from a can of chickpeas. I have a recipe for how to make aquafaba at home, which is what I often do when I want to make a large quantity of it to keep in the fridge.

FYI, I have had success with aquafaba from chickpeas, soybeans, and blackbeans. So use what you’ve got!

Want To Make A Vegan Cake… but Chocolate?

Thinking you’d like to make a vegan cake, but chocolate flavored? I have a recipe for that too!

Use my recipe for vegan chocolate cake.

I use coconut oil to make the frosting for this vanilla cake. It’s important to always use refined coconut oil if you don’t want to have any coconut taste in the end result. I like using coconut oil instead of vegan lard or vegan baking sticks because it’s less expensive, only has one ingredient (so easier to write a recipe that stays consistent for everyone), and especially in this cake, it adds no flavor or color, which is what we want!

There are two ways you can make the vegan buttercream frosting. The first way, as shown in these photos of the vanilla cake, is a more traditional frosting that’s fluffy but spreads more smoothly.

You can also make a whipped buttercream frosting, which is what I used in the chocolate cake recipe. Just add a teaspoon or two of water or plant based milk to the frosting once you have completed the normal recipe, and whip it in. It gives it that whipped texture that’s even lighter and fluffier.

How To Get Even More Vanilla Flavor In Your Cake

I used clear vanilla extract (also known as imitation vanilla extract) in this cake and in the frosting. It’s a clear liquid that won’t add color to your cake, for a very white cake, but since it’s imitation, it has less vanilla flavor.

My recommendation to add a more intense vanilla flavor is to add vanilla sugar. There are different kinds of vanilla sugar out there, but the one you want is basically like a superfine sugar (looks like powdered sugar) with vanilla bean seeds in it. You will be able to see the tiny dark vanilla seeds in the vanilla sugar as well as in the final cake (they won’t darken the overall color of the cake though). And they’ll add MUCH more vanilla flavor.

If you want to add vanilla sugar, I would simply add in about 1-2 teaspoons of it without making further adjustments to the other ingredients.

Here’s the vegan buttercream frosting recipe I used on this cake.

Do I need to use cake flour? Can I use all purpose flour?

You can use all-purpose flour for this recipe. It will work but it will be slightly less fluffy than the cake you get if you use cake flour.

Can I use self-raising flour?

Do I need to sift the flour?

Yes, please sift the flour. A sieve or a wire mesh strainer or an actual sifter will work best. If you don’t own any of these things, whisk the flour for about 30 seconds before adding other ingredients to aerate it. 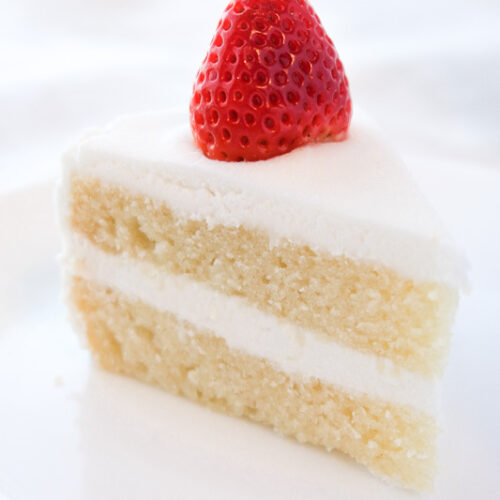