This satisfying vegan pasta with spinach, crumbles, and Alfredo sauce is kid-friendly and makes enough to feed the whole family. I make it in the Instant Pot in less than an hour! 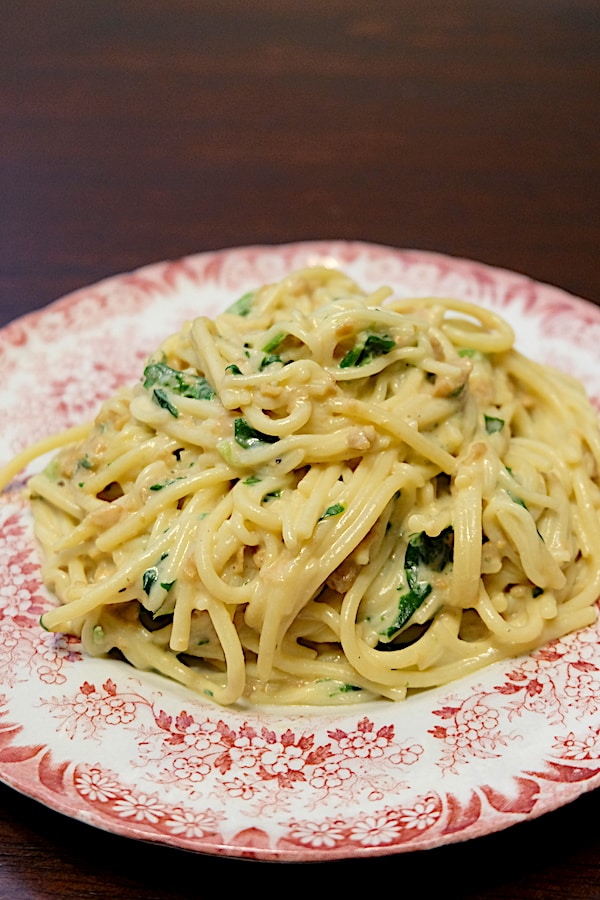 Earlier today I posted my vegan Alfredo sauce recipe, which uses a blend of water, cashews, and herbs to mimic the rich taste and texture of a real Alfredo sauce.

Before moving forward and making a dinner out of it, I asked my kids to taste test a little so I could make sure they liked it.

By now, they may have learned that when mom says, “taste this,” it’s hit or miss. So I was happy when their eyes lit up upon tasting this sauce and they said, “yum!”

We’ve been making pasta in our Instant Pot for a few years now, and I just recently learned how to cook spaghetti-type pasta in it as well so that’s what I used in this recipe.

What I love about cooking pasta in the Instant Pot is that it uses less water and less time. You don’t even have to strain the water out of the pasta when it’s done cooking, how great is that?

The method to create this dinner is very quick and easy, although I recommend making the Sauce beforehand and keeping an extra jar or two in the freezer. It only takes a few minutes to blend together, so you can also make it at the same time as you boil the pasta.

Before putting the lid on the Instant Pot to pressure cook the pasta for 2 minutes, I add in about 1 cup of frozen spinach. That’s equal to about half the block of a typical package of frozen spinach, in case you were wondering!

Once the pasta is cooked, you can manually release the steam and pour in the Alfredo sauce and crumbles. I put the lid back on for another 5 minutes or so just to make sure everything is warmed through and through.

So there you have it! A quick, easy vegan dinner you can make on any weeknight. If your kids are like my kids, chances are they won’t even believe you when you tell them this pasta doesn’t have any cheese in it!