Vegan Chili In The Instant Pot

Texas-style chili… it’s what’s for dinner! In Texas, we like our chili like we like our tea – that is, without beans in it! Try this meatless version of the classic and tell me you don’t like it.

Chili is one of those foods that can be hard to explain to people who have never heard of it. It’s not soup… it’s not really stew, either. It’s just… chili.

I did eat my fair share of chili growing up, even in the Far North. Ma always made it with ground beef, kidney beans, and a spicy sauce.

Being the picky kid that I was, my favorite part of the dish was the cheddar cheese sprinkled on top, and the island of sour cream floating in the center of the bowl. Ma’s chili was always accompanied by corn bread, buttered.

Eventually I learned that the kidney beans were the real prize of the dish. The large reddish beans absorbed all the flavors of the onions and spices, which blended so nicely with the soft texture and mild flavor and texture of the beans.

Chili, Beans or No Beans?

When I moved to Texas as an adult, I became more curious about what locals had grown up eating. I found a few old church cookbooks at used book stores and started reading the recipes.

It was there that I discovered some truly awesome Texas dishes such as “West Of The Pecos” and “King Ranch Chicken Casserole.”

I also learned than in Texas, to make a real Texas-style chili you don’t add beans.

Beans are important enough that they ought to be served as a side dish, you see.

So I started making my own Texas-style chilis, sans beans. And well, at risk of sounding like a carpetbagger I think I actually like it more without the beans.

In this recipe, you can use store-bought crumbles or homemade vegan taco meat.

This time I used the Earth Grown Vegan Beefless Crumbles which is found at Aldi. This was actually a bit tricky to locate in the store, but I eventually found them (and a load of other vegan frozen foods) in the chest freezer section. I believe that freezer may have had some labeling on it that said “Aldi Finds.”

I really like these crumbles, they have a great taste that goes well in pasta, tacos, pizza, and yes, even this chili!

Alternatively, you could use homemade tofu crumbles or even TVP. My vegan taco meat recipe is actually perfect for this chili and I think it has a meatier texture than any of the store bought crumbles I’ve tried.

In my recipe, I puree a few tomatoes and strain out the seeds/skins to add tomato to as the chili base.

I think you could use an 8oz can of tomato sauce as well. I like to make my own tomato sauce/juice since there’s no can to worry about afterwards. It’s difficult for me to access recycling facilities so I try to go package-free where I can.

I like using mashed up avocado in place of sour cream. It adds the perfect creamy mix to the spicy, savory soup.

There is a good vegan sour cream substitute you can buy as well, called Tofutti. Tofutti has an unappetizing smell in the package, but once it’s in food I can’t detect the smell. It’s nice and creamy just like real sour cream.

Pro tip: add some lemon juice to Tofutti to give it more acidity! 🙂

I also add vegan mozzarella cheese to my chili once it’s in the bowl. This time, I used the Earth Grown Vegan brand which is available from Aldi. I found it in the refrigerated section with the rest of the shredded cheeses: 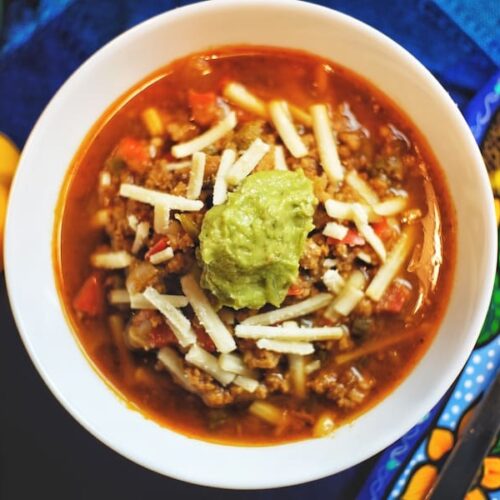 I recommend using one green bell pepper and one of another color. I usually use one green and one red.
Course: Vegan Dinner Recipes
Cuisine: Tex-Mex