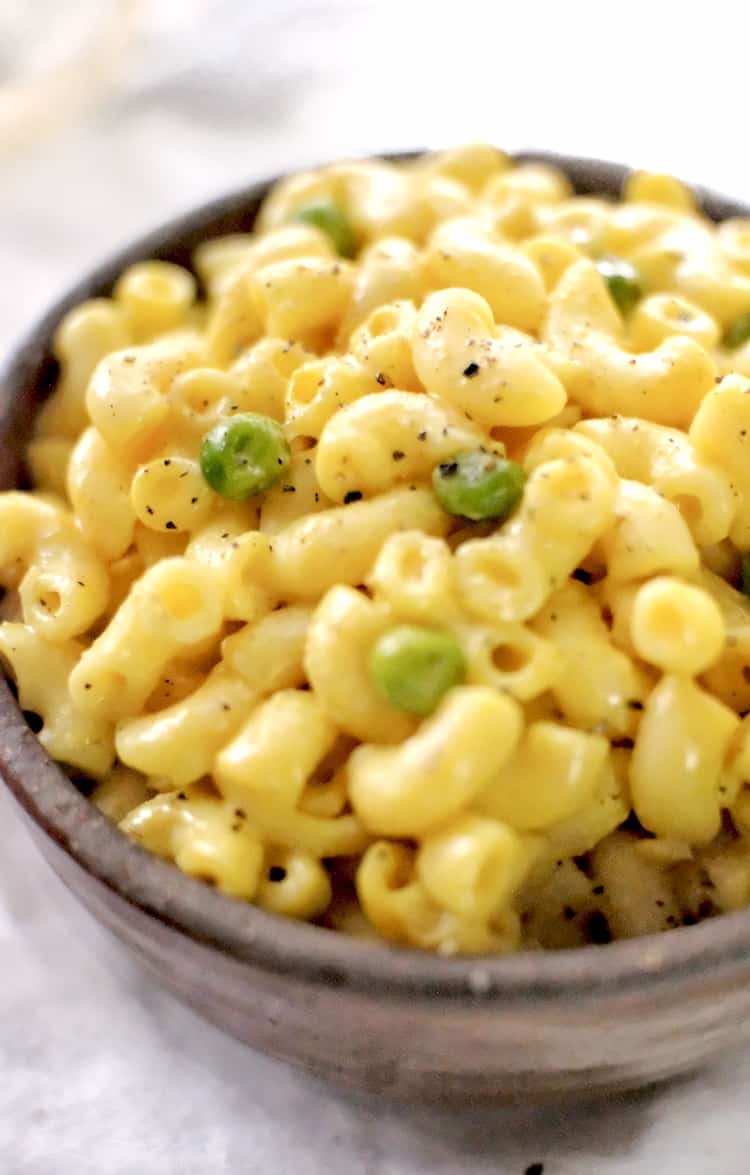 A comforting classic, this vegan version of homemade mac and cheese tastes just like mama used to make, minus the milk and cheese!

When it comes to making new recipes at home, my kids are always my most important critic. Their opinion on how my food tastes matters, because if they don’t like it, they won’t eat it!

So I summoned my brave taste testers into the kitchen a few times while I worked out the kinks in my vegan mac and cheese recipe. The first time they tasted my cheese sauce, my eldest made a face and said it tasted like peas. Which was weird since there were no peas in the sauce.

After a few iterations, I finally got it to taste just right. I told my kids, “Lunch is ready! Come eat!” and they came to the table. But when they got to their seats, there was just a little bit of mac in their bowls. I said I wasn’t sure if they’d like it, but if they want more they can have some.

Well, they both ended up loving it so much that they each ate 3 bowls full. They ate all the mac and cheese that I made! And they couldn’t believe when I said it doesn’t have any milk or cheese in it.

Another plant based recipe for the win!

There are many different ways you can make this mac aside from the “standard” cauliflower sauce method I describe in the recipe below. Try changing it up!

This Instant Pot macaroni is one of the best plant based meals to cook for your family. It’s easy, kid friendly, and the sauce is made of veggies.

In order to make a plant-based version of macaroni and cheese in the Instant Pot or on the stove, you’ll need to cook some vegan pasta as usual, by heating it up in water until it has absorbed enough to become soft.

Then you’ll add some “cheese” sauce, only we won’t be using ANY cow’s milk, cheese, or butter.

Here are some of the ingredients I used to make this delicious vegan mac.

This whole recipe started with me having some leftover cauliflower stems that I didn’t want to throw out. I’m seeing a lot of cauliflower recipes that say to use the florets only.

Cauliflower florets are great, but what about the stems? We can eat them, too!

Next time you use cauliflower in a recipe, put the (trimmed) stems back in the bag and save them for this recipe! You can even store them in the freezer.

In this recipe I used the stems from a single head of cauliflower. It amounted to about 2 cups, after I chopped it into dice-sized pieces.

You don’t need to peel the outer layer of the stems, since they’ll be cooked until soft and blended into a puree later on.

If you don’t have cauliflower stems, the cauliflower florets will also work just fine! But if you have a choice I say use your stems. It’s a great way to sneak in some extra Vitamin C and Vitamin K to your body!

If you’re worried the outcome will be too “veggie” – trust me, it won’t. It’ll be creamy, tasty, and dang close to cheesy.

I made my mac and cheese with oat milk instead of cow’s milk in this dish.

Using other types of plant-based milk is okay for vegan cheese sauce as long as they are unsweetened. With the addition of the rest of the ingredients, you can’t really discern soy, oat, or almond flavor in the finished sauce. I have made this recipe with unsweeted almond milk and it also came out very good.

Which type of plant-based milk you use to make the “cheese” sauce depends your preferences when it comes to price and nutrition/calories. Oat milk tends to have less calories than almond or soy milk, but it is also the least expensive, especially when you make it yourself.

If you’re coming from a non-vegan or non-vegetarian diet you may be unfamiliar with this ingredient.

Nutritional yeast (not to be confused with brewer’s yeast) looks a bit like fish food flakes, but it tastes very good. It’s got the mouth-watering umami of soy sauce, with a kind of nutty, tangy flavor. Many people think it adds a cheesy taste to foods.

Nutritional yeast is also an excellent source of B vitamins, including vitamin B12 which is hard to get from a plant-based diet.

If you are an experienced nutritional yeast eater, you could double the amount in this recipe for vegan macaroni and cheese.

Monosodium glutamate is also called Aji No Moto. The MSG that I have (made in the USA) is extracted from corn. Umami flavor is found in cheese, so to recreate that flavor in a vegan way I used MSG.

This ingredient is only to add the “missing something” from the sauce, but you can certainly make it without MSG if you want.

Someone in an online vegan forum told me that they made this recipe with a teaspoon of white miso paste, and it worked well to give it that extra “yum!”

I like to add some frozen peas to my finished vegan mac and cheese. I add it at the same time that I add the cheese sauce to the pasta, so it heats up quickly in the pot of hot mac.

We also love adding cooked vegan meatballs (you’d want to bake or microwave them first if they’re frozen) and vegan crumbles (like Boca or Morning Star Farms crumbles). With the crumbles it ends up tasting a lot like Hamburger Helper!

(Fun fact: The hamburger helper calories is about twice as many as my cauliflower mac and cheese… yikes!)

Making the cheese sauce taste yummy without any milk or cheese was the key to getting this recipe correct. After all, pasta is pasta.

I decided to use a combination of cauliflower, oat milk (or almond milk works well too), cashews, and nutritional yeast blended up with a small amount of spices to give color and flavor.

When making mac in the Instant Pot, vegan cheese can just be poured over the pasta once it’s done cooking. It’s very simple and easy.

See all my instant pot vegan recipes and plant based dinner ideas!

Pin this recipe if you want to remember to make it later!

Want more plant based diet recipes? Click or tap to see all my veg recipes for the Instant Pot and vegan dinner recipes! 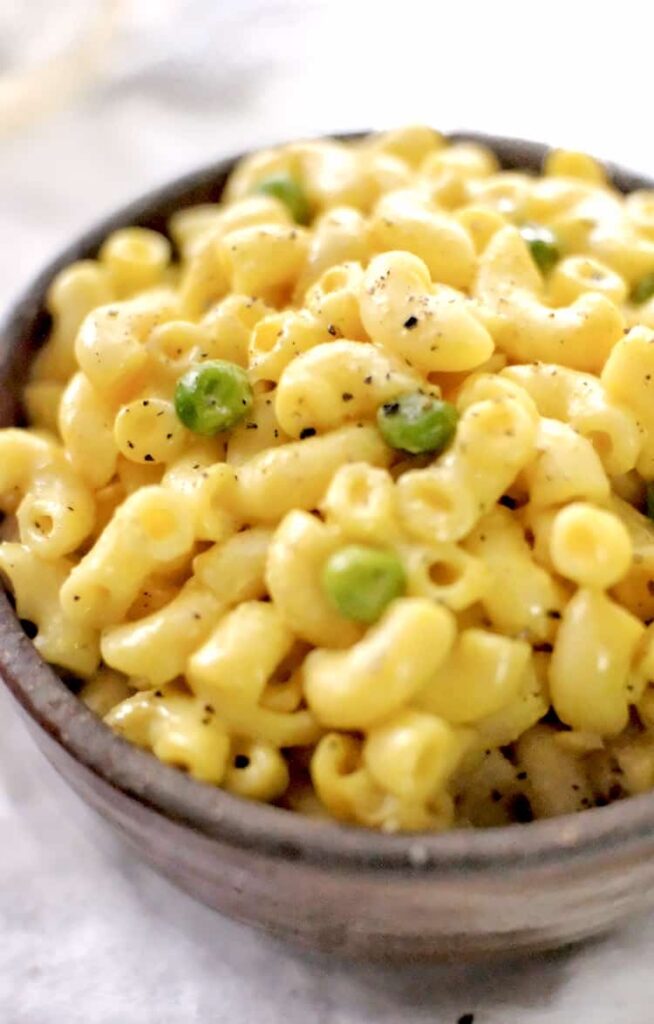