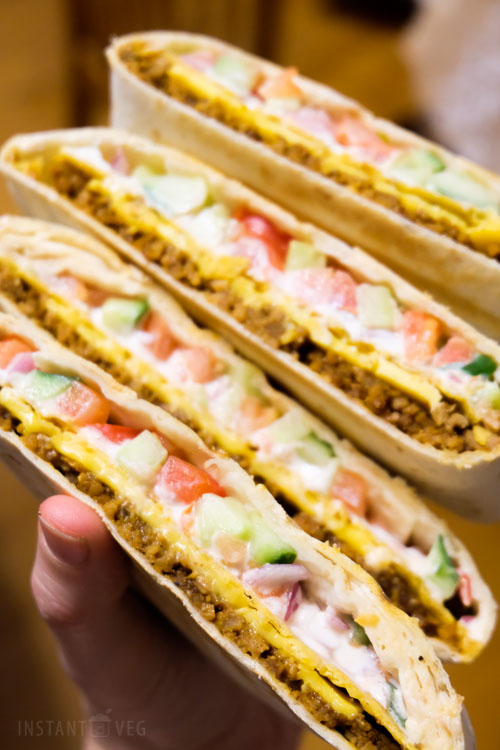 These vegan crunchwrap supremes are even better than the ones at Taco Bell. This recipe will show you which ingredients to use to make your crunchwrap vegan and step by step instructions on how to make them.

Making vegan crunchwraps at home is a lot easier than you’d think! They’re so tasty and so satisfying that I honestly don’t want to make normal burritos at home ever again. These are just too good!

The official crunchwrap supremes that you can get at Taco Bell now come in a vegetarian black bean version. I’ve had both the meat version and the bean version, and while the black bean one was good, I’d be lying if I didn’t think it just wasn’t the same.

We eat tacos all the time in my family, at least once a week. So coming up with a reliable and delicious vegan taco meat recipe was one of the first things I busied myself doing when I decided to go vegan.

Luckily, it goes perfectly in these crunchwraps!! But, if you don’t or can’t consume soy, you can always use black beans, refried beans, or tofu sofritas as your crunchwrap protein filling.

One of the important points about making DIY crunchwraps is finding the rigth size of tortillas. If you can find 12″ tortillas, use those!

Unfortunately I wasn’t able to find 12″ tortillas easily, and I figured many of you lovely readers might face the same issue. So I used 10″ tortillas and came up with an easy hack to make them stretch around the whole crunchwrap without any worries about leakage.

For the cheese, I love using Daiya brand American cheese slices, which are vegan. It melts up well and has a tasty creamy texture that’s a lot like the nacho cheese used at Taco Bell in their crunchwraps.

For the fresh veggies in my crunchwraps, I did a similar process that I like to do when making tacos or burritos at home. I dice up my tomatoes, cucumber, and onion, and then blend it all together in a bowl.

That way I only need one big scoop of veggie mix when assembling tacos (or crunchwraps) instead of three smaller scoops.

I almost forgot to mention the vegan sour cream! In this recipe, I’m using the Tofutti brand vegan sour cream. I don’t love the way it tastes plain, so I add a little bit of lemon juice to it. Once it’s in the crunchwraps, I didn’t notice any off-taste with it – just a nice tangy creamy taste, only slightly more subtle than sour cream.

Avocado slices or even guacamole would make a great alternative to sour cream in this recipe.

First, gather all your ingredients so you are ready to quickly assemble the crunchwraps. Here’s a list of the ingredients I used:

If using 10″ tortillas, cut one of them up into 9 equal pieces by slicing it in thirds and thirds again in the opposite direction (like a # pattern):

Next heat up an electric griddle or grill. I found that the easiest and quickest way to cook crunchwraps is to use some type of lidded grill like a George Foreman grill (what I used!) or a panini press.

An open-faced griddle like a pancake griddle, or even a frying pan, would work too. It helps to have something heavy, like a heavy bowl or plate, that you can set on top of the crunchwraps to weight them down while they cook, so they don’t come unfolded. That’s why I love using the George Foreman grill – it holds the crunchwraps shut and cooks both sides at once!

Once you’ve got your ingredients gathered and your griddle heating up, you can start assembling the crunchwraps.

How To Make Vegan Crunchwraps

I made 2 at a time but you can do as many as you want.

To assemble a crunchwrap, first lay a tortilla on the counter:

Next, add about 1/4 cup of vegan taco meat in a neat circle in the center.

If your tostadas are cracked up in pieces, don’t worry, just roughly put a few together like this and it will be fine:

Next, spread some vegan sour cream on that tostada. You can also use guacamole.

Then top the sour cream with your fresh veggies.

Next, add a piece of the cut up tortilla. If you are using 12″ tortillas, you might not need to do this. I’m using 10″ tortillas in these pics and I needed to use the small piece of tortilla to completely seal up the crunchwrap.

Then you can start folding up the crunchwrap. First, fold the side closest to you up to the center, and then make 2 more folds up from the sides of the first fold, like this:

Next, make 2 more folds going toward the center on each side, as shown:

Fold the remaining part of the tortilla towards the center to make a completely folded up crunchwrap:

You can set a plate on top of your folded up crunchwrap while you fold the rest of them, or while waiting to put them on the griddle.

I recommend placing your folded up crunchwraps upside down on the griddle or grill, so they stay shut by their own weight.

If you’re using a grill with a top and bottom heating element like the George Foreman grill I’m using, you can close the top and let both sides cook until the tortillas are browned.

If you’re using an open griddle, keep a plate on top of the crunchwraps while they cook so they stay shut. Or you can hold them shut with a spatula. The weight helps the folds seal shut while they cook.

When your crunchwraps are cooked adequately, they’ll look something like this:

When the crunchwraps are done cooking, the folded side should seal itself shut like this:

I hope you enjoy making your own vegan crunchwraps! Don’t they look yummy?!

Course: Vegan Dinner Recipes
Cuisine: Tex-Mex
Tried this recipe?Let us know how it was!
Affiliate Disclosure: As an Amazon Associate I earn from qualifying purchases.

Pin the image below to save it for later!