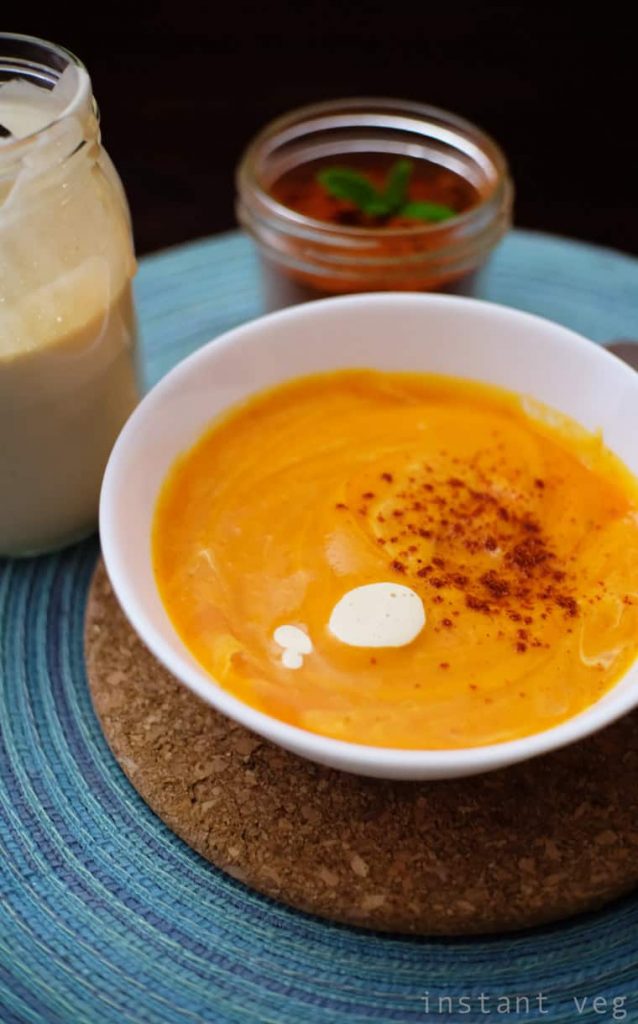 This carrot soup is completely vegan and includes fre garlic, and savory herbs. It balances perfectly with rich cashew cream to create a satisfying and warming soup for those chilly winter days.

In France, the classic carrot soup is called Potage de Crécy. While the traditional version is not too hard to make, I decided to make an even quicker version that could be easily tossed together using my Instant Pot and blender.

There is NO straining involved in this recipe, and the end result is ultra-smooth and creamy. It’s lovely eaten alone, or you can add some croutons, crackers, or dip some bread in it. We love having it over rice or oven roasted potatoes, too!

Carrot soup isn’t something we regularly eat in our household. And to be honest, the first time I made it, everyone said, “It’s good, but…”

After making the recipe a few more times I figured out what it was. Most of the recipes for vegan carrot soup that I tried have ginger in them as an ingredient. It was the ginger that was giving it an off-taste, so in this recipe, there is no ginger! Now everyone loves it.

The garlic adds a little heat and a little kick – but not enough to make it too spicy.

We topped off our bowls of carrot soup with some extra dollops of cashew cream and a generous sprinkling of sweet paprika.

As a side dish, a few ideas you could make are some oven roasted potatoes, rice, or toast.

The process to make this soup is SO easy. All you have to do is peel the carrots and potatoes, roughly chop up the big veggies and throw them in the pot with the herbs and spices with 2 cups of water, like this:

Then just set the Instant Pot to cook on Manual/Pressure mode for 8 minutes. Make sure that the steam vet is turned to “Sealing.”

Once the pot beeps that it’s done pressure cooking, you can manually open up the steam vent and allow the steam to release. Then let the ingredients in the pot cool down for about ten minutes.

In the meantime, add 1 cup of cashews and 1 cup of water into a high speed blender. Some people say to soak the cashews first when making cashew cream, but I just throw them in and blend them straight from the package.

After about 45 seconds blending the cashews and water at a high speed, boom! We have a creamy, dreamy cashew cream. It will be the consistency of salad dressing or sauce, a bit on the thinner side which blends in more easily with the soup.

You can pour your cashew cream into a jar and set it aside for later.

Now let’s get back to the soup ingredients. Remove the bay leaf from the carrots and veggies that cooked up in the pot.

Then take your Instant Pot ingredients (including all the liquid in the pot) and add them into the blender.

Then go ahead and blend the soup until it’s completely smooth.

Add in about half of the cashew cream and blend or stir it together with the carrot soup.

Now you’re ready to serve! If serving this as a regular soup in bowls, add a few swirls more of cashew cream and a few pinches of sweet paprika to the surface of each soup.

(I tried it with smoked paprika as well and didn’t think the flavor was very good. Best to use SWEET paprika or spicy if you have that.)

You could additionally add some croutons to this soup if you want, or serve it over rice.