This rich, decadent Instant Pot cheesecake tastes like it came right from a fancy bakery, but it’s actually made without eggs or milk! Using the Instant Pot cuts down the baking time and produces a moist, creamy cheesecake that won’t crack or brown. 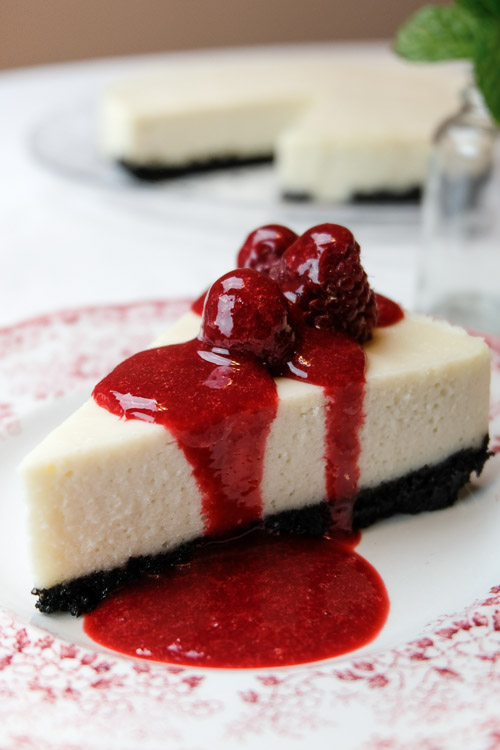 Coming up with the perfect cheesecake recipe hasn’t been easy. I think I probably tried making this Instant Pot cheesecake 17 times before the I got the recipe just right. But as you’re about to find out, making this cheesecake perfectly every time is a snap.

Using an Instant Pot eliminates so many of the problems you can get when trying to bake cheesecake in the oven.

The Instant Pot contains all the moisture in a small space, so the cake won’t turn gritty or start to brown or crack.

I wanted this recipe to taste as close to a real New York cheesecake as possible. It tastes very rich and creamy, as if it were really made with eggs and cream. It’s almost crazy to think that it’s actually eggless and dairy free! Same taste, minus the cholesterol.

The cheesecake crust is one area where you can change it up and play with flavors. I made my cheesecake with an Oreo crust, but you can just as easily make it with a graham cracker crust.

To go with the cheesecake, there’s also a quick & easy raspberry sauce. It’s made by microwaving frozen raspberries, with a little bit of water and sugar. If you want you could use frozen strawberries or blueberries, or a berry mix.

Cherries would also make a wonderful flavor for the sauce! Berries in general work better than other fruits because the tartness in the berries goes with the creamy, tangy cheesecake so well.

How This Vegan Cheesecake Is Made

You can buy blanched almonds in the store or simply make them yourself. It’s easy – just pour boiled water over your raw almonds and let it sit for about 2-3 minutes. Then drain the water out and squeeze on the almonds. The skins will slip off quite easily.

To get started with the crust, first scrape off the cookie centers and grind up the Oreo cookies. I used off-brand vegan “Oreo” style cookies in this crust and it came out tasting awesome.

Add the melted vegan butter and sugar to the food processor and combine until smooth. Then dump the crumbs into your lined cake pan as so:

Press the crumbs down gently with a flat-bottomed measuring cup. You don’t need to pack them down too hard, but just enough so they stick together well. Try to make the bottom level and the sides even.

When making the cheesecake, you’ll first need to grind up the blanched almonds very finely. To make it simple, I just added my almonds and all my other cheesecake ingredients EXCEPT the cream cheese to a blender, and blended it for about 2 minutes.

After scraping down the sides, I then added the vegan cream cheese. You’ll need about 1 1/2 packs of cream cheese in this recipe.

Then I blended the cream cheese mixture until it was very, very smooth, with only the tiniest of particles. It took about 5 minutes of blending and scraping down the sides of the blender to make it very smooth and liquid-y.

Then, just pour your blended cheesecake mix into the pan, over the prepared crust. Tap the pan gently on the table to force up air bubbles, and use a fork to rake the bubbles out.

Next, you have to get the Instant Pot ready. Make sure the inner pot is completely clean and add a wire rack and 1 cup of water to it.

Now take a look at your Instant Pot lid. Or take a sniff, I should say. Smell the silicone ring and gasket. If they have any spicy smell left over from when you cooked a chili or something else with a lot of spice, remove those parts and scrub them with soap, then rinse and dry them well.

I find that sometimes spicy foods embed their spicy smell into the silicone parts of the Instant Pot even after they’ve been washed. So now I just like to use different silicone rings for different things. I have a red one for spicy foods, a clear one for moderately spiced things, and a blue one for things like this cheesecake which have no spice.

If your silicone rings smell spicy, the spicy smell can transfer itself into the cheesecake – so double check it before you cook with it!!

Once you’re good to go with your silicone seals, set the valve on the Instant Pot lid to venting.

Turn on the Instant Pot to “Sauté” and watch until the water starts to boil.

Put the lid on, turn the valve to sealing, and push “Pressure Cook” or “Manual” and set it to cook for 25 minutes. Allow it to do a natural release when done.

You can make the raspberry sauce while the cheesecake is cooking. Just combine the raspberries, 1 Tbsp water, and 1 Tbsp sugar in a bowl and microwave for 2 minutes. Then, use a fine mesh sieve to filter out the seeds. Use a ladle to help push the raspberry sauce through the sieve. Whisk in 1/2 tsp cornstarch.

After the pressure valve has dropped, open the lid carefully and allow the cheesecake to cool down with the lid off. Once it’s cool you can take it out, cover it (with an upside-down bowl if you don’t have a cake cover) and refrigerate it for 8 hours or overnight.

Serve with the sauce and more raspberries! This cake will surely be a hit you’ll want to make again and again.

You’ll also need a wire rack to set the cheesecake pan on – most electric pressure cookers come with a little wire rack that sits at the bottom.

I’m using a 7 inch springform cake pan to bake this cake. I lined the inside of it with parchment paper. Don’t put vegan butter, etc on the parchment paper to make it stick in the pan – you’ll want to be able to easily remove it from the pan, later!

In order to easily remove the cheesecake from the Instant Pot (and to put it in it, for that matter) I created some “handles” for my springform pan by folding a large sheet of tinfoil into about a 4″ strip. I placed the pan over the tinfoil and then folded the ends of the tinfoil up. It works well although you still have to be careful not to drop the cake pan or let it slide off!

To make the Oreo crust, I used a food processor. You could also put your cookies (or graham crackers if you decide to make a graham cracker crust) in a ziplock bag and crush them with a rolling pin.

To make the cheesecake, I used a high speed blender. I think a regular blender or a food processor would work as well. You need something that’s able to pulverize the blanched almonds. 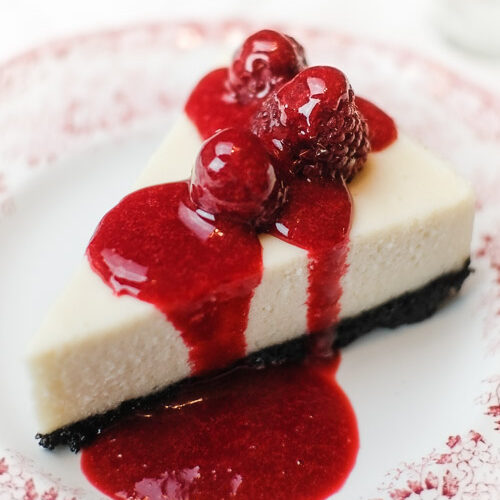 For the Oreo Crust

For the Raspberry Sauce

Hungry for more? Be sure to check out all my vegan desserts!

Pin this recipe to make it later!
Vegan Desserts 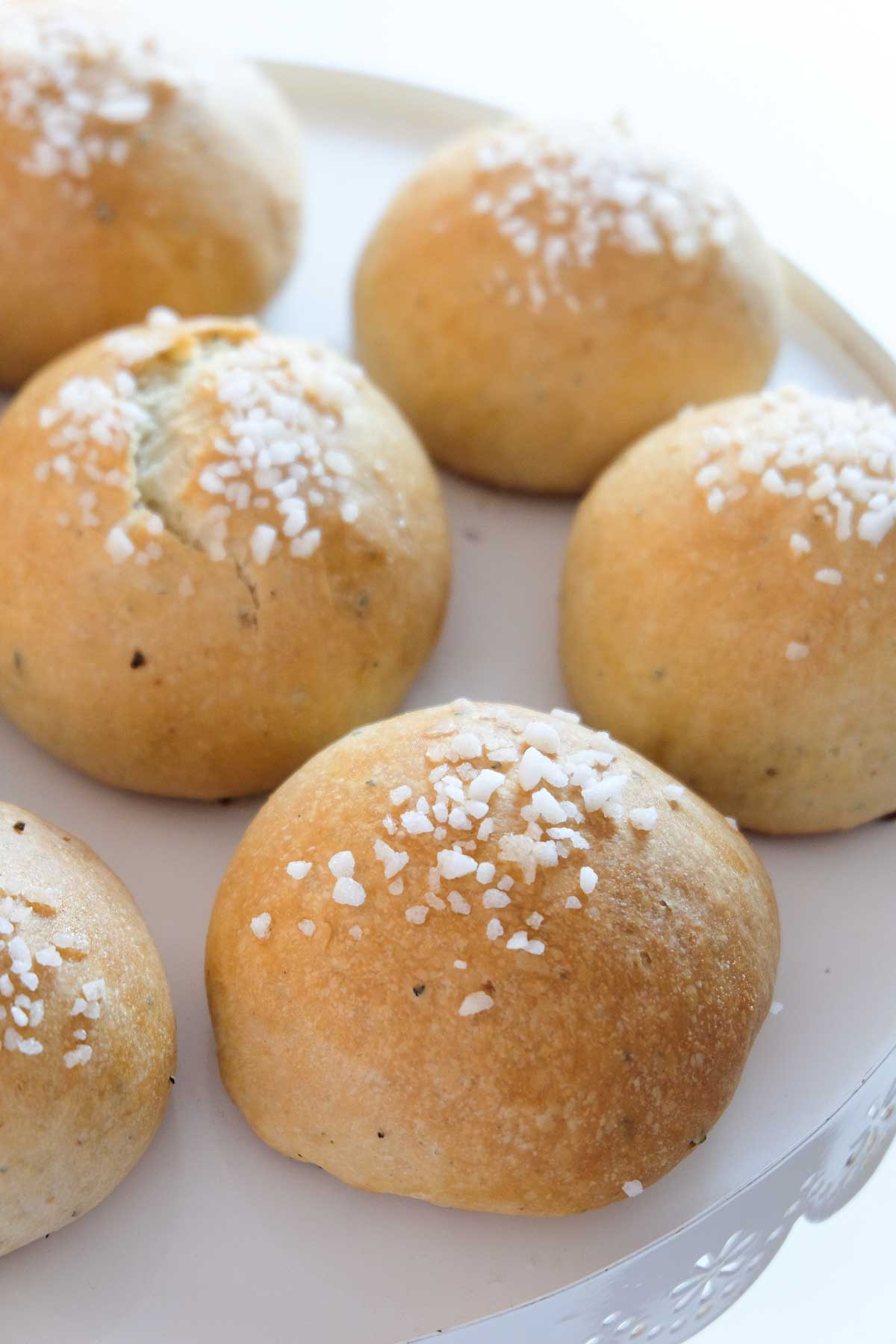 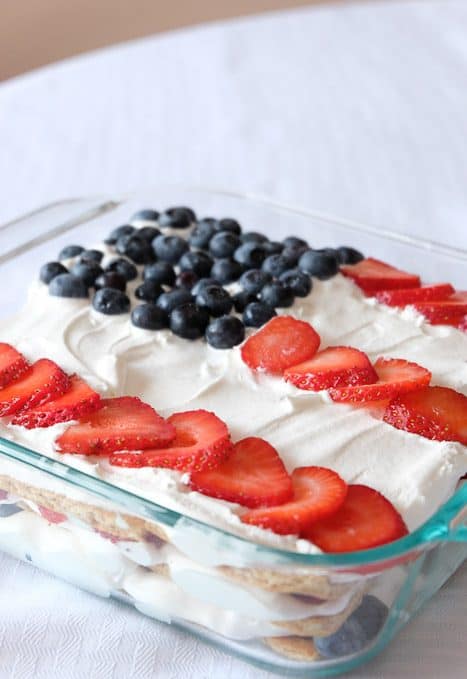