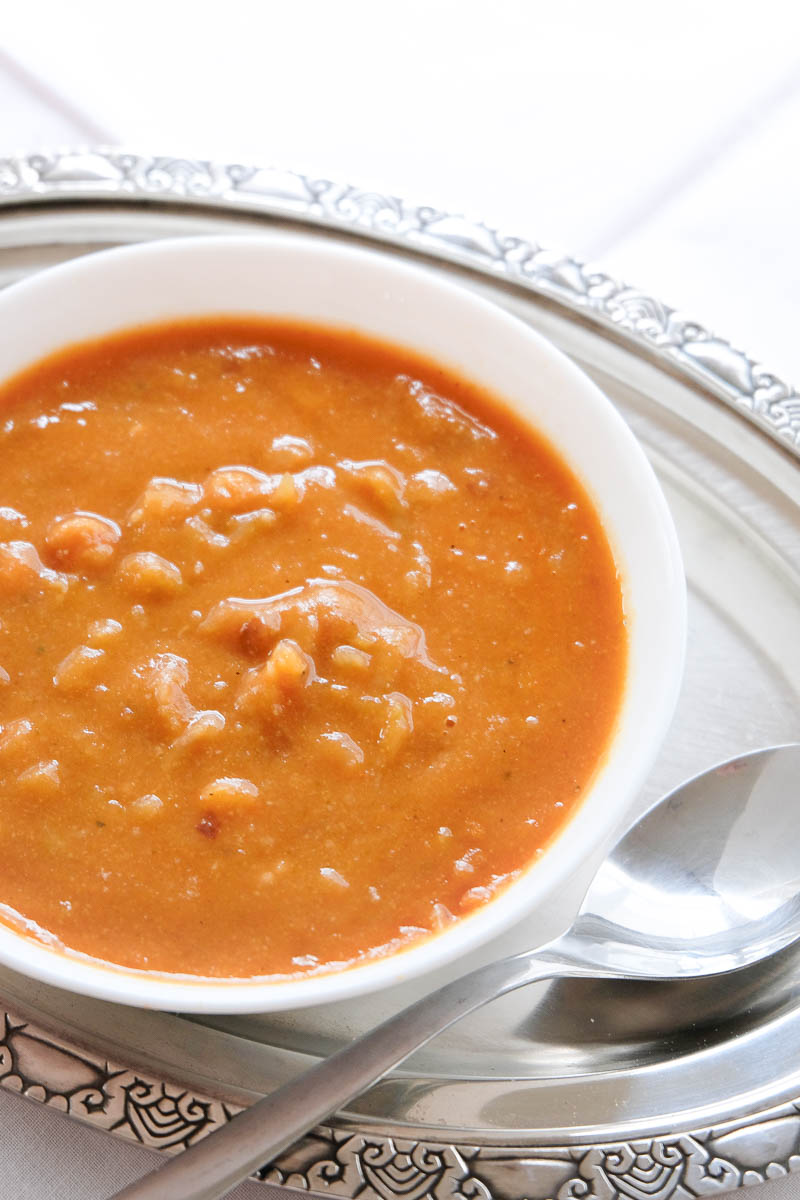 This vegan chickpea soup uses dry or canned chickpeas (garbanzo beans), cabbage, tomato, and garlic. But don’t be fooled – this soup, simple though it be, is rich in flavor and sure to become as instantly a classic in your home as it has in ours.

For the past few months I’ve been, like most of you, staying home as much as possible. My great “escape” during these months has been getting obsessed with all things of the Victorian-era: books, magazines, movies, TV dramas, anything I can get my hands on really!

So as I dug through yet another book of 19th century cookery, one recipe stood out to me for its unique combination of ingredients, as well as its potential to be made vegan with very little modification.

I adapted this chickpea soup recipe from Soup à la Béarnaise, as seen in Charles Elmé Francatelli’s 1846 cookbook, The Modern Cook. You can read it for free on Archive.org.

If you’ve watched the Masterpiece TV drama series Victoria, you may remember Mr. Francatelli, the palace cook who flirts with Victoria’s dresser a.k.a. lady’s maid.

While it is true that Francatelli was Queen Victoria’s chief cook in 1840-42, the TV romance is not based on actual events (as far as we know!)

Francatelli’s cooking style was mostly French, and his chickpea soup recipe gets it’s name from Béarn, a region of southwestern France.

Here is how Francatelli’s recipe originally appeared in 1846:

What I Changed From The Old Recipe

The most obvious adaptation I made is using vegan butter instead of dairy butter, and skipping altogether on the Parmesan. I also used regular round cabbage instead of the white-heart cabbage, which I wasn’t able to find at my grocery store.

I also changed the method a bit just to cut down a bit on cook time. In the original recipe it says to soak the chickpeas (garbanças) overnight; I used the Instant Pot to quickly re-hydrate them.

Another modern time-saver I chose was to use a immersion blender and mesh strainer to refine the soup instead of pounding and rubbing it through a tammy (or tamis, as it is nowadays written).

To make the soup as I have done, you’ll need an immersion blender and something you can filter the soup through such as a mesh sieve, tamis, china cap/cone/chinois, etc. This will make the texture of the soup a lot smoother and give it a good body. You can make the soup without filtering but it will have a much different texture.

It’s worth it to remove the skins or hulls from the 1/2 cup of chickpeas that remain whole in the soup – it makes the soup easier to digest and less likely to make you bloated afterwards. We felt that this soup was very easy on our tummies compared to other bean soups.